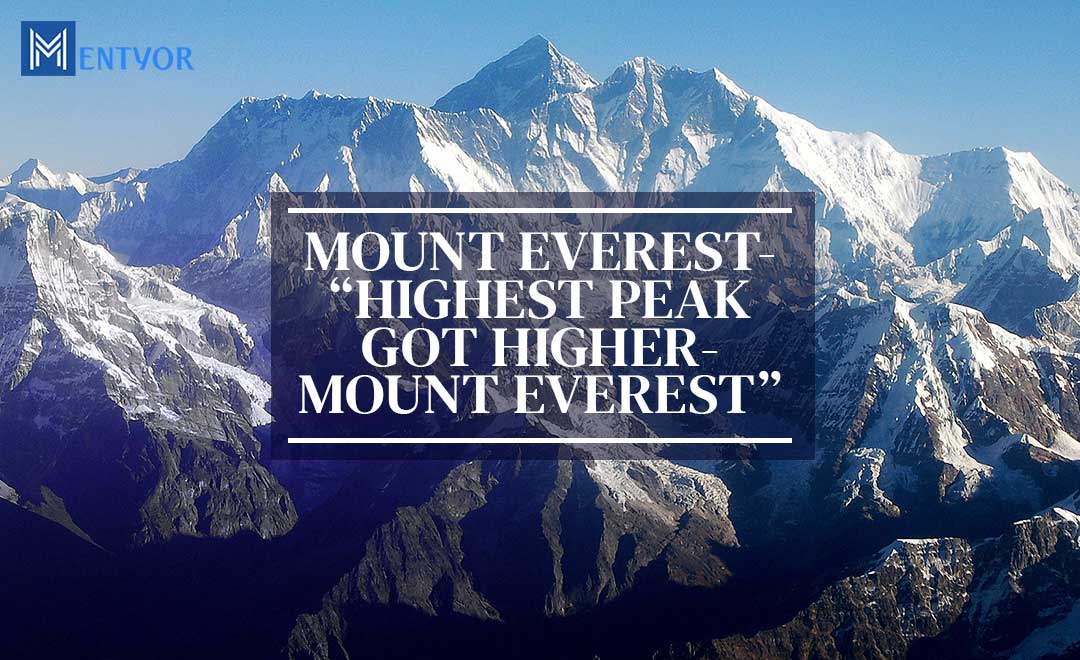 Unusual happenings, both happy and sad have been a part and parcel of this year. And one of the unusual things which has been witnessed this year is that Highest Peak Got Higher – Mount Everest. The world’s highest mountain peak; the Mount Everest, has been declared to be a little higher. A new standard height for Mount Everest has been jointly agreed by China and Nepal. An official figure of 8,848.86 meters has been presented (Source – BBCNews).

• How to Make a PPT – Beginners Guide to Make Creative Presentations

• Best Books That Made 2020 A Ravishing Experience

How to Measure the Mountains?

In the first method, with the help of GPS satellites, a satellite navigation marker was set up on the Mount Everest’s peak.

Nepalese crew also used Theodolites to take measurements. Its usage was first recorded in 1856 to gauge the mountain’s height. Principles of trigonometry which involved measuring angles was used. The most brilliant mathematicians of his time Radhanath Sikdar has done that. He made one of the most wonderful discoveries. While working for his great trigonometrical survey that Everest is the tallest mountain in the world. After that many surveys have been done to gauge the exact height of the mountain with the latest technology available in the market.

Ground penetrating radar was also used. It was used to ascertain the quantity of snow and ice that has accumulated on the zenith of the highest rock (Source – SLATE).

Did You Know? – Mount Everest insiders

When we want to ascertain the height above sea level it is regarded as a difficult process. Tides, magnetism and various other factors determine the ocean levels to a great extent.

If the highest mountain is to be named on the basis of its measurement from the earth’s core, Mount Chimborazo can be described as the world’s highest. It stands more than 6800 feet above in comparison to Mount Everest (Source – AtlasAndBoots).

And also If the highest mountain is to be measured from the feet of the mountain to the zenith, Mauna Kea from Hawaii stands the tallest but much of its portion remains submerged under the sea. Highest Peak Got Higher – Mount Everest

GPS satellites which have been used by Nepalese team, were firstly used by Bradford Washburn who was a cartographer and an explorer. In 1999, the GPS technology was used to measure the Everest summit. Therefore, an altitude of 29,035 was delivered.

Why the New Measurement was Done for Mount Everest?

The idea of measuring Mount Everest can be attributed to the fact that in 2015, an earthquake with 7.8 magnitude occurred. This earthquake resulted in the deaths of approximately 9000 people in Nepal. Also, it was suggested that this particular incident might have given a new dimension to the height of Mount Everest.

It was then, that the Nepal government took the clue and decided to pursue the measuring of mountains on their own. And so, will discontinue following the Survey of India findings of 1954.

The role of providing technological help was taken up by New Zealand as it has shared an emotional bond over the mountain with Nepal. It can be attributed to the fact that Sir Edmund Hillary from New Zealand and Tenzing Norgay who was a Sherpa were the first to climb Mount Everest, the highest peak in May 1953. Taking this memorable fact and one of the most cherished moments of history into consideration, Nepalese survey department was provided with GPS technology. And so, trained scientists and technicians to handle that operation.

More reasons why the new measurement was done

A webinar was hosted on 8th December. This included the Foreign Minister of Kathmandu and Beijing; Pradeep Kumar Gyawali and Yang Yi respectively. Without going too much in the technical details, a simple announcement for the new height of Mount Everest was made. Therefore, the mutual cooperation was highly appreciated. This mutual cooperation is also being seen as an indication of the increasing economic, cultural and political ties between the two nations.

Now, an obvious question arises here, that how come China became a part of measuring the height of the highest peak of Mount Everest. To understand this, we need to know that a memorandum of understanding (MoU) has been signed by both the sides to make their results public. Earlier, separate measurements were conducted by the Chinese side (Source – FinancialExpress).

Mountain was closed by both countries for the climbers because of the fear of a coronavirus pandemic.

Will there be any Conflict Between Both the Sides Over this Issue?

Mr. Damodar Dhakal, The Joint Secretary and Spokesperson for Nepal’s Department of Survey, replies in the affirmative. According to him, the same results have been ascertained by both sides so the accuracy with which the methods have been used appear reliable and credible.

Although more than 300 people have died on its slopes and the 2015 earthquake (which set off the huge avalanches killing 18 people) was a huge setback. As it had almost put a full stop on the mountaineering activities of the season. But the excitement and thrill of conquering the highest peak of Mount Everest has not rolled back. According to Garrett Madison, who is associated with the Madison Mountaineering Company is enthralled with the prospects of conquering new pinnacles of Mount Everest.

A height of almost 8,850 meters which was set in 1999 by the National Geographic Society and Boston’s Museum of Science, has been used by various western climbers.

In reference to the Himalayan Database which keeps the records of the climbs, 5,789 people have tried their luck climbing the great Mount Everest for 10,184 times.

Some More Interesting Topics for you to Read