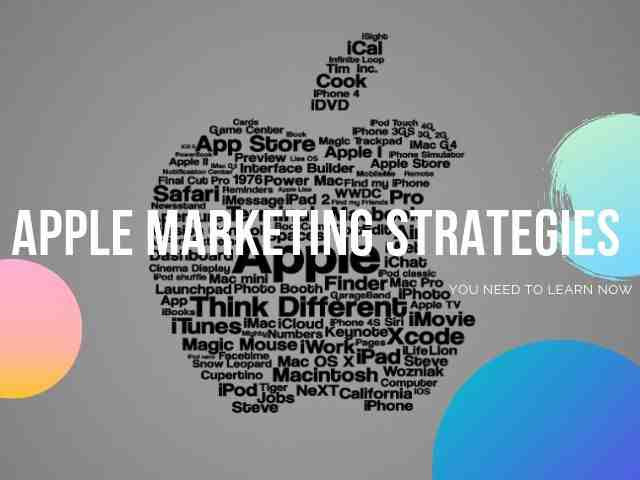 At the time of buying your phone, computer, and the accessories for it, it is uncanny that you do not think of Apple. Apple has become quite synonymous with 21st-century gadgets. Undoubtedly, the USP of the brand remains its quality. However, to make the name reach every other person, the brand acquires an in-leveled Apple Marketing Strategy.

The growth of the company’s revenue is exemplary and noteworthy. It has grown exponentially in the decade of 2004 – 2014 from a figure of 8 billion dollars to 180 billion dollars. The statistics speak of the success story of its Apple marketing campaign itself. We have all seen, been a part or read it on news about the queues forming outside the stores. They have customers, loyal customers, and a separate fan base who would stick to it.

Apple is known to have brought the revolution with its products in their niches. Their products are different from their counterparts. It gives something unique to its customers with every product. The Apple marketing campaign does not involve only the promotion but is a package of reasons about why everyone should buy it.

The apple marketing strategy analysis has revealed that college teens find it so cool that they do save their money for it. Yet, the market has also made it so sophisticated that it has become a symbol of class. Its compelling designs paired up with high-end utilities give it an edge.

It is evident from looking up at the marketing strategy of Apple that it believes in quality over quantity. Apple entertains a small setup with no large and complex retailing relays. The United States has less than 500 stores countrywide.

The approach of the company looks more inclined towards assisting the customer with the product and making them well acquainted with it. Apple does not believe in pushing the product on customers or forcing them to buy it anyway.

The online store of Apple is already known for its superior interface. Apple has profoundly marked its presence on the web. Apart from the store, E-commerce websites sell Apple products. The websites boast of selling the apple product due to its brand value and popularity.  They also earn a lot of revenue from Apple products. Hence, these are easily available with the comfort of one’s own favorite platform.

Better partners with Sales and Distribution

For a better distribution and sales of Apple products, the brand has partnered with names like Redington. Such partners are responsible for the distribution of products into the market after Apple sells them the products in bulk orders. There are various premium retail stores owned by the retail partners of Apple.

For a better relationship with its customers, Apple brought in the Apple Genius Bar. It is a walk-in service center to assist Apple users with the issues coming in their iPhone or Ipad or MacBook.

Thus, Apple makes sure to be at the ground level with its premium services at every level. It’s online and offline presence along with the retailing and distribution allows it to connect well with the users.

The basic and common trait in all Apple products is simplicity. It does not believe in spreading various narratives through marketing to explain the cost and efficiency of a product. It makes Apple stand out from its contemporaries.

The marketing strategy of Apple is very well reflected in its advertisements. All the ads by Apple are influential and communicate a simple message weaved around the product. It involves fewer words and an impact message- free of jargon and the one to which the audience can relate.

Apple Marketing Strategies also do not favor employing a number of channels to reach consumers. It rather chooses credible channels with higher conversion rates. It leads to customers being influenced by the marketing campaign rather than pushed by it.

Giving out the simplicity statement every time, Apple does not shy away from stealing the limelight with its grand appearance and big apple marketing budget. For such an instance, in the year 1984, Apple promoted its Macintosh in all the advertising space available in Newsweek.

Be the change everyone wants to see

Apple is at the zenith today. But things are not the same since ever. Apple has toiled hard to come at the position. The journey to rule the gadgets market has been a toiling one.

Like every other company, Apple’s marketing budget too was mistaken in its stratagems. However, with time, it embraced the changes to the best of people’s convenience while preserving its’ uniqueness at the same time.

There has not passed much time since owning an Apple product was thought of as a hindrance due to its less compatibility with other brands. There was a narrative that an apple product is not apt for coding. However, it has comprehensively changed. Now, one can look out at many programmers who are a fan of Mac.

No shying away from bold steps

The beginning of the change started in the late 1990’s which also happens to be the period when Apple started to gain prominence in the market. Several noteworthy steps that Apple took to change the outlook of the market towards it were the launch of i Mac and the change in appearance.

The company, Apple which stuck to grim colors shifted towards bright colors and even a brighter future. During the same time, it came up with another efficient strategy for the comfort of people. It made the surfing of the internet possible only through connecting the iMac with a phone line. The people found it easy and started rooting for it.

Hence, it made clear that to serve people’s desires what they want while maintaining the uniqueness of the product alive is one of the influential Apple marketing strategies.

Apple never made its image as a follower of market norms. It has always been a leader who is never scared to take a novice and bold steps. Let us study how its distinct marketing strategy changed the prospects of the iPod and made it a smash hit.

While Apple’s marketing budget was all prepared to launch the iPod in the market, the market was preoccupied with multifarious mp3 players. And, as Apple’s music player, iPod was of rather superior quality. Hence, the most obvious marketing strategy to motivate people to buy an iPod was the better quality. However, Apple deviated from this norm.

It not only reformed its strategy but reinvented the way people looked at music players or music files. The genuine iPod was made to store 1000 songs as it had a capacity of 5GB. It was far more than any other brand of music player.

However, the idea of innovation did not stop there. Apple introduced the concept which we call today, music streaming. It launched iTunes, which was able to download the songs on the go. The songs were available for people to listen to at much lesser cost than the music CDs in the market.

Moreover, I was not only about the storage facilities which made the iPod a hit. After the initial success of the iPod, when Apple launched its third version, the iPod was able to be connected to a PC. One only needed to download iTunes to their computers and the files could be organized by them. The feature was so intriguing that the mouth of the word traveled far.

• WHAT IS AMAZON MARKETING STRATEGY

Hence, Apple proved it not only through iPod but also through other examples set by it that creativity yields results. A mix of creative idealization, innovation, and critical thinking has made a vital role in the marketing of the product.