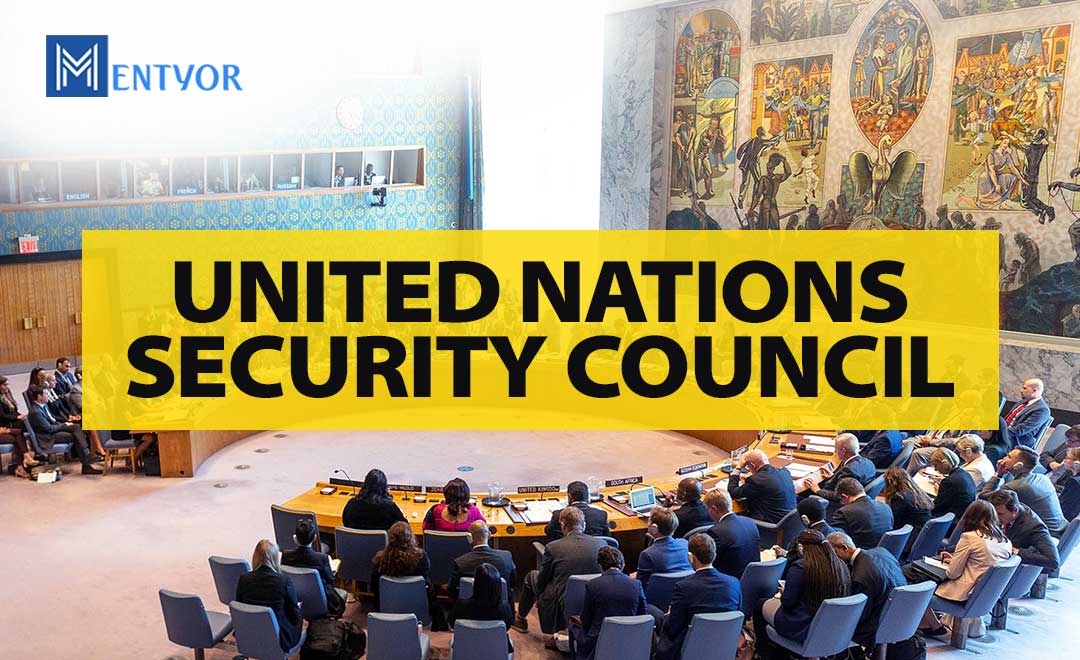 The United Nations (UN) is the largest supranational body which has the fundamental responsibility of sustaining international peace and security. It has the highest cross-country representation and is focused on enhancing friendly relations among nations. We shall discuss all about the UN Security Council, the UNSC Functions and the UNSC Members here.

United Nations focuses on achieving transnational liaison and cooperation. Currently, it has five active principal organs: The General Assembly, The UN Security Council, The Economic and Social Council, International Court of Justice and The UN Secretariat. However, among these five bodies, the only body that has the power to issue binding resolutions and has passed as many as 2573 resolutions (as of April 2021) is the UN Security Council.

The League of Nations was the first ever global transnational body having the key responsibility of maintaining international peace and security. It was founded after the First World War (WWI), that is, in the year 1920. However, the outbreak of the Second World War (WWII) clearly demonstrated that the League of Nations had failed its key mission. So, it culminated its operations and was wound up in 1946 after its member nations started exiting the League. Following WWII, the UN Security Council was established. This was done in order to remit the shortcomings of the League of Nations.

The UN Security Council was formed in 1945 and it held its first session in January 1946. It is headquartered at the United Nations Conference Building in New York City. It holds its meetings all year round in a designated chamber in the UN Conference Building. As a result the meetings held in the Security Council Chamber are covered by the international press. Because of such a wide media coverage, the proceedings of these meetings are held in a highly theatrical manner.

The UN Charter allows the UN Security Council to institute subsidiary bodies in order to accomplish its objectives. The authority of these subsidiary bodies, whether they are formed as Committees or as Working Groups, can range from trivial procedural matters (such as documentation, routine procedural hindrances, etc.) to pressing substantive matters (such as counter-terrorism, peacekeeping operations, etc.) The various Committees, Operations, Advisory bodies, etc. set up by the UN Security Council are as follows:-

Saint Vincent and the Grenadines

The veto power does not confer upon them the right to prevent any procedural matters or to prevent any discussion or debate. These five members were the triumphant nations in the Second World War (WWII). And ever since their victory in WWII, they have housed the most powerful military forces in the world. They have been consistently ranked as the nations having the highest military expenditures every year. That ought to be a significant reason for their status as permanent members of the UN Security Council. Contradictory, the ten non-permanent UNSC Members hold their seat in the Council on the basis of geographic region.

At present, the temporary members of the UN Security Council represent the following regions: Africa (Niger, Tunisia, Kenya); Asia-Pacific (Vietnam, India); Eastern Europe (Estonia); Latin America and Caribbean (Saint Vincent and the Grenadines); Western Europe and others (Ireland, Norway). Their term is rotational in nature. That is, they are elected for a two-year term by the UN General Assembly, with five members being replaced every year. A retiring member (that is, the member being replaced in a particular year) is not qualified to be re-elected.

UNSC Members hold the position of the UNSC President for a period of one month one after the other. Thus, each member gets to hold the presidency sequentially on the basis of alphabetical order of the names of the member nations. Accordingly, India shall hold the presidency of UNSC in August 2021. The President of the UN Security Council sets the Agenda of their meetings, presides at the meetings and oversees any crisis.

As per the UN charter, the UNSC Functions are primarily concerned with maintenance of international peace and security in accordance with the principles of the United Nations. Therefore, the Council is authorized and appropriately empowered to investigate any situation that has a potential to hamper international peace and create friction. The Council can, then, suggest alternative course of actions for harmonious resolution of such disputes and terms of settlement.

The UNSC Functions also entails persuading its member States to apply economic sanctions, thereby enforcing its rulings and decisions militarily or otherwise. The resolutions passed by the Council are usually enforced and administered by the UN peacekeepers. Basically, UN peacekeepers are the military forces provided voluntarily by UNSC members. They are sent to regions where armed disputes have recently been terminated or paused in order to enforce the terms of peace arrangements and to avoid any further hostility.

The UNSC Functions includes, among others, providing recommendations for the admission of new Members in the Council. The UNSC also recommends to the General Assembly the appointment of the United Nations Secretary General (Sec-Gen). Also, the Security Council along with the General Assembly are responsible for electing the Judges of the International Court of Justice.

The Council is also entitled to exercise the trusteeship functions of the UN in “strategic areas”. Strategic Areas are those defined territories for which all UNSC Functions (including approval of or amendments to the terms of trusteeship agreements) are performed by the UN Security Council instead of the UN General Assembly. UNSC Functions also entails formulation of plans for the institution of a system to regulate armaments. The Council is also charged with the function to determine the existence of any threats to international peace. It also determines any act of aggression and is responsible for recommending the actions to be taken for its settlement and resolution.

The UN Security Council can suggest measures not involving the use of force to prevent aggression. Contradictory, the Council can also take military actions against the aggressors if it deems fit. So that is all about UNSC Functions and the powers conferred upon the Council.

UNSC Resolution is the formal assertion or expression of the school of thought or will of the UN Security Council. Most recent resolutions passed by the Council as listed on the official website of UNSC include the following:

So these were the major resolutions passed by the UNSC most recently with the main objective to fulfill UNSC Functions. Thus over the years, UNSC has faced a number of criticisms and allegations too. It includes lack of will to prevent ethnic massacres in Bosnia and Rwanda, the questions raised on the effectiveness and relevance of the Council.

Its failure in resolving various conflicts (such as the Israeli-Palestinian conflict, Cyprus, Syria, etc.) has also faced severe criticism. There have also been allegations and evidence of bribery on the UN Security Council. However, in spite of all these criticisms, the UN Security Council continues to fulfill its responsibilities and has been quite successful in ensuring global peace and security.

One Reply to “UNSC: WHERE SUPERPOWERS MEET”