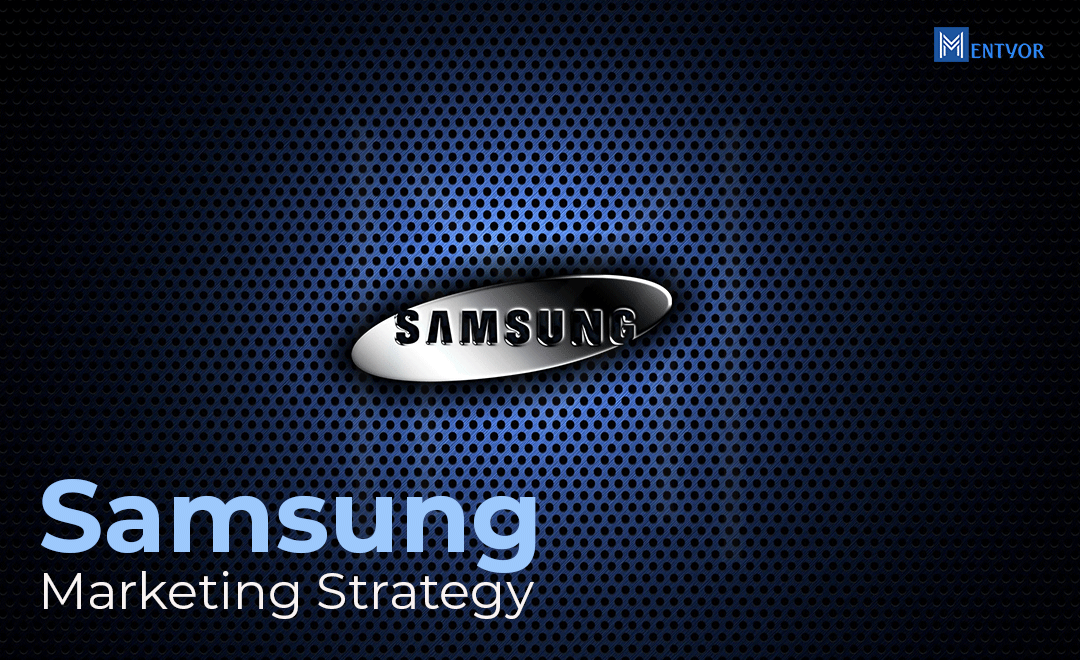 Samsung, one of the most well-known brands in technology today, was founded in 1938 by Lee Byung-Chul. The Samsung Marketing Strategy is one of the best business strategies in the world. When put under the microscope of Samsung SWOT Analysis or Samsung PESTLE Analysis, it is one of the most efficient business infrastructures.

A BRIEF OVERVIEW OF THE SAMSUNG MARKETING STRATEGY

This article delves into Samsung’s product, price, promotion and advertising, and also talks about the company’s distribution strategy. It also sheds some light on the Samsung SWOT Analysis and Samsung PESTLE Analysis.

Let’s begin with Samsung marketing strategy and 4Ps of the marketing mix:

The following points illustrate the product procedure in the Samsung Marketing Strategy:

Samsung spends a lot of money on research and development (R&D) to ensure that its consumers get the best goods and services possible. It provides a diverse selection of products in a variety of categories. Samsung marketing mix also provides a wide range of services. There are five categories in which the products can be classified.

These are some of the products in the Samsung Marketing Strategy.

Samsung Marketing Strategy includes a competitive pricing strategy. Samsung has not been able to establish itself as the best market leader in other product categories. However, Samsung is a reliable brand and is ready to beat the likes of Apple marketing strategy in terms of technology, finance and economy. Hence, it is critical for Samsung to use competitive pricing to avoid flanking attacks from its market competitors.

Samsung has a price skimming method as well. For example, when Samsung introduces new products with various storage capacity options, the price of these products rise. When other competitors release a smartphone with almost similar characteristics, Samsung reduces the price and easily avoids losing market share as a result of the competitor’s debut.

These two pricing structures cover the Samsung Marketing Strategy as a whole.

To understand the Samsung Marketing Strategy, we need to discuss its distribution methodology according to the places as well. The Place and Distribution Strategy of Samsung is described below.

Samsung sells to retailers and service providers directly. Only service dealers are responsible for corporate sales as a result of this strategy. Because Samsung is such a well-known brand, technology retailers almost always have to include it in their selections. Samsung’s strength is its distribution. We will also discuss this in the Samsung SWOT Analysis.

Samsung also distributes its products through a single distribution business in one location, which then distributes them to other sites.

PROMOTION AND ADVERTISING IN THE SAMSUNG MARKETING STRATEGY

Promotion is an important part of the Samsung Marketing Strategy. Thus, Samsung considers advertising to be the most effective type of marketing for engaging new customers and positioning the brand. Samsung uses newspapers and digital media to market new goods. To make use of celebrities’ large followings, the brand invites a number of celebrities to serve as brand ambassadors and market their products. At the same time, Samsung advertises its products alongside highways with large placards, hoardings, and posters.

The company also uses a variety of promotional techniques to persuade customers to purchase the goods. Samsung is also well-known for being a major event sponsor. During national festivals, Samsung offers significant discounts and offers, etc.

This sums up the 4Ps of the marketing mix included in the Samsung Marketing Strategy.

The Samsung SWOT Analysis is an evaluated management concept that allows a company like Samsung to analyze its business and performance with respect to its competitors in the industry. Samsung is a well-known name in the IT and technology industry. It competes heavily with the Apple marketing strategy when it comes to mobile devices and computers.

Samsung SWOT Analysis will focus on the company’s strengths, weaknesses, opportunities & threats. This is a very important mechanism in measuring the company’s successes and failures, resulting in overall growth.

Some of the strengths of this major technology & gadgets firm are listed below in the Samsung SWOT Analysis.

In spite of being one of the leading tech giants, Samsung has its own share of weaknesses when held under the microscope of Samsung SWOT Analysis. Some of them are:

Samsung has a lot of opportunities for improvement, as seen in the following points of the Samsung SWOT Analysis.

Here are some of the threats as we see in the Samsung SWOT Analysis that this technology giant is facing today.

WHAT IS SAMSUNG PESTLE ANALYSIS?

After Samsung Marketing Strategy and SWOT Analysis lets us see the Samsung PESTLE Analysis. Samsung is a multinational corporation that competes in the “White Goods” market or the market for consumer electronics and appliances. Thus, Samsung PESTLE Analysis deals with the political, economic, social, technological, Legal and Environmental factors concerning the conglomerate.

The political environment in most of the markets where Samsung operates is favourable to its operations, and while there are small irritants in some overseas markets, such as India, Samsung may be said to be operating in regions where political considerations are friendly. The US government is attempting to influence the Eurozone in order to prevent Samsung from having a market in Europe.

Samsung now has a presence in more than 58 countries. Samsung mostly invests considerably in infrastructure in each of the countries where they do business. It has done a good job of adjusting to the decline in consumer discretionary income. Samsung PESTLE Analysis is showing that especially in the industrialised world, Samsung has achieved this feat by growing into emerging and developing countries.

Samsung finds gaps in the technology in people’s lives and fixes them with their products, which bring us to the Samsung PESTLE Analysis. It operates in a market segment that is heavily influenced by customer lifestyle preferences, and because socio-cultural elements vary by region, it has had to reorient itself accordingly in each area.

Samsung is regarded as one of the most innovative corporations in the world. This indicates that the company has a competitive advantage in terms of harnessing the potential of technology and driving innovation for long-term economic gain. Taking advantage over the rival companies in this way is very crucial when it comes to the Samsung PESTLE Analysis.

Samsung faced harsh penalties for allegedly copying Apple’s iPad and iPhone, and as a result, the company’s public perception and consumer approval of its tactics have suffered. It is difficult for the corporation to navigate its way out of the legal challenge in which it finds itself in developed markets. This is the only option that Samsung PESTLE Analysis comes up with.

Samsung needs to be mindful of the way it develops its products to appease the ethical chic consumer. They always want their brands to source and manufacture items in a socially and environmentally responsible manner. Therefore it implies that under Samsung PESTLE Analysis, it must ensure that the working conditions and wages it provides to its labourers who are involved in the final product are not compromised.

With this, we complete an overview of Samsung SWOT Analysis and Samsung PESTLE Analysis highlighting the advantages and disadvantages of the organisation.

Samsung Marketing Strategy is absolutely top-notch. So much so, that it can almost beat the Apple marketing strategy. This fact has especially been illustrated in the Samsung SWOT Analysis and the Samsung PESTLE Analysis section of this blog. Samsung’s loyal customer base is one of the best assets that the company possesses today. The tech giant has proved that it takes a lot of integrity and hard work to achieve the top spot in any field, be it in the world of finance or the field of technology i.e. the world of computers.

Indeed, the stakes couldn’t be higher as the corporation seeks to grow its global reach in the midst of a pandemic economy and a fiercely competitive technical market landscape.