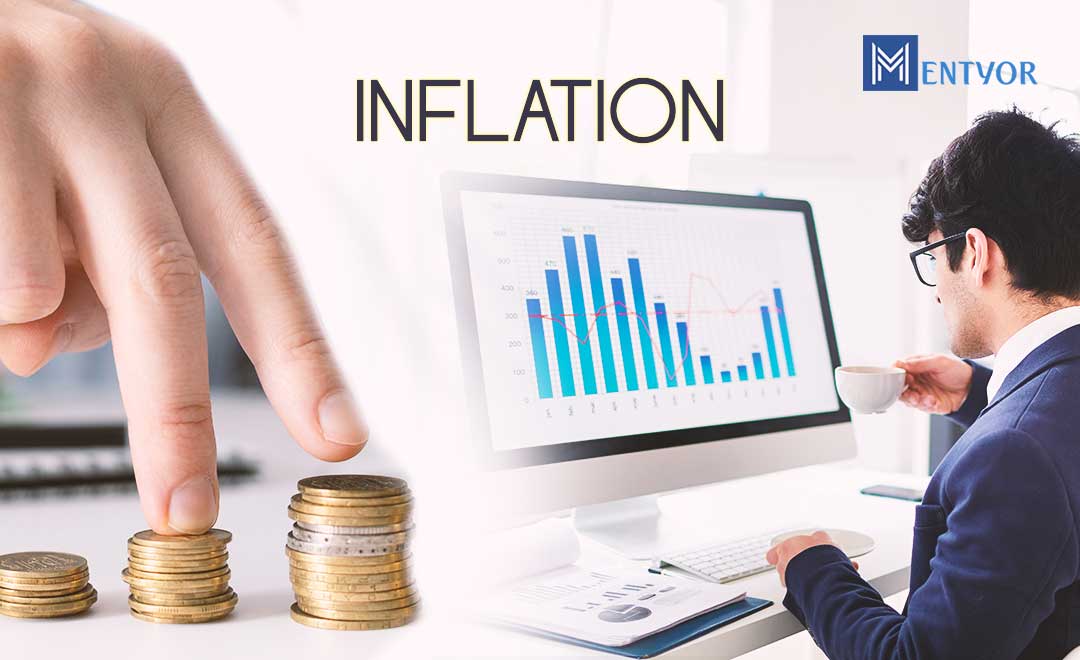 In simple words, inflation is a phenomenon where the general price level in the economy constantly rises. In our blog of “Inflation”, you will have a better picture of types of inflation, inflation rate, hyperinflation and consumer price index.

In the following sections, you will have a fine idea about the types of inflation, causes of inflation, effects of inflation on the economy and the ways to control it using different measures. But first, we will start with the inflation meaning to get a birds-eye view of the concept. Let us begin.

As you have read in the previous section, the constant rise of the general price level is called inflation. Therefore by the definition, it is very clear to you the inflation meaning. When there is a constant rise in the price level of the economy the purchasing power of money(dollars) gets reduced. As, when the price of a particular commodity or service is high therefore the units consumed in exchange for that amount of dollars will be less.

According to Trading Economics, the inflation rate in the US has increased to 5% in May, 2021. In the month of April, the rate was calculated to be 4.2%. The 5% rate in the US is the highest ever recorded since August 2008. The primary reason behind the high inflation rate is Covid 19 pandemic. Due to the strict lockdown in the country, the demand for goods was low. Therefore, after the lockdown was lifted, the consumer demand for various goods and services kept increasing. As a result, the prices of goods and services also increased.

Therefore, when the prices of goods and services in the US economy increased, it led to inflation. Another reason behind the rise in prices in the US was the supply curve. Supply of goods in the US was affected because of the non availability of transportation facilities.

Let us take a look at how inflation rate affected the price level of various products in the US soil.

Inflation in economics is a major concept. In the following section you will read about the various types of inflation that affects the economy. Let us begin:

Creeping Inflation is a mild rise in the general price level of goods and services in the economy. According to the Federal Reserve, a 2% increase in prices benefits the economy. Creeping inflation is beneficial for the economy.

When the inflation rate in the economy is between the range of 3% to 10% it is referred to as walking inflation. Some governments use inflation targeting mechanisms to control the rise in prices. Inflation rate which is above 6% is a problem for the economy. Since the general price level increases rapidly.

When prices of goods and services in the economy increase by 50% then it is referred to as hyperinflation. The primary cause of hyperinflation is when the government prints currency for funding in wars or for any other reason.

In simple words, stagflation is the stagnation in the economy accompanied by inflation. As a result, in such cases the economy is in a stagnant mode. But, at the same time, the price of various goods and services increase. Such was experienced in the year 1970 in the United States of America.

Core inflation means the increase in the price of different goods except for food and energy. The Federal Reserve uses core inflation to define its monetary policy in the country.

When the price of a particular asset for example, gold, gas, oil increases in the economy it is called asset inflation. Asset inflation can be experienced in Gas, Oil, Food and Gold.

The oil market is very volatile in nature. Therefore the prices of oil keep on changing. When the supply of oil in the economy reduces, it increases the prices of this particular asset. Another reason behind the rise of the price of oil is the increase in the crude oil prices.

One of the most liquid assets in the world is gold. To match the demand of gold in the market, there should be a subsequent supply too. But sometimes, the supply of gold falls short that rapidly increases the price of the asset.

The general rise in the price level can be because of various reasons. The most important reasons behind the causes of price rise is the high demand or low supply in the economy. The primary factors that are responsible for inflation are the demand pull factors and the cost push factors.

Know more about “Law of Demand” from our blog.

The Keynesian concept explains that there is no relationship between money supply and price level in the economy. Therefore, according to the Keynesian concept, aggregate demand increases because of increase in consumer demand, government expenditure and investment.

Now let us see the reasons behind the demand pull theory of the rise in price in the economy.

Read our blog on “Law of Supply” to know more about the topic.

The reasons behind the rise in price due to cost push theory are:

In the next segment, you will get to know who benefits and who looses when there is inflation in the economy. But, before that let us see the effects of inflation on the economy.

The effects of price rise can be classified into two broad segments: (i) The effect on the distribution of wealth and income. (ii) Overall effect on economic growth.

EFFECT ON DISTRIBUTION OF WEALTH AND INCOME

When there is price rise in the economy as said earlier some benefits and some loose their money income. In case of inflation, usually the money income of the people increases at the expense of the others. The rise in price affects every individual in different ways. Now let us se e the effects on different people.

Creditors are the people who lend money and debtors are who borrow money from the lenders. In the case of price rise, debtors give back the exact sum of money which he had borrowed from the creditor without calculating the inflation rate. What $10 could buy in 2015, in 2021 the same basket cannot be bought in $10. Now in the current year i.e. in 2021 that same basket can be bought at $20. The difference of $10 is caused due to inflation.

The same idea works in favor of creditors and debtors. For example, assume a creditor credited a $100 to a person in 2015. What $100 could buy in 2015 is different from what it can buy in 2021. Now after 6 years, the debtor gives back the $100 to the creditor, the creditor will be on the loosing side. Thus, you can say that creditors loose and debtors gain during inflation.

Bond holders are the ones who earn regular interest from the money they had invested. The income return on investment are fixed. The interest rates on bonds do not depend on inflation. As a result, when the income is fixed, price rise in the economy has an effect on the bond holders. In such case, bond holders loose as their real income decreases.

Inflation also has a negative effect on salaried persons. Since the salaried persons come under fixed income group the real income of them decreases when prices increase. In this case too, salaried people loose when there is inflation in the economy.

In the situation, when there is inflation in the economy, black marketers are benefited. As during such times, when the prices of goods and services are high black marketers tend to increase the supply of goods in the market in anticipation of higher profits.

The effect of inflation may not always yield higher level of output. Inflation has a favorable effect on production. When the prices are increasing in the economy, the sellers will increase the price of various goods to earn profits. At the same time, companies are interested for higher investment to earn high profit margins.

In another report posted by Bloomberg Economist, “2021 will be a year plagued by numerous unwarranted inflation scares. Consumer inflation will remain weak over the medium term until the economy fully absorbs the slack resulting from the pandemic“.

Read our blog on “Monetary Policy” to know more about the topic in detail.

Inflation targeting is one of the most used tools to control the price rise in the economy. According to economicshelp.org “The UK Inflation target of 2%, +/-1“.

Another tool which used by the Government to control inflation is fiscal policy. Implementation of taxes is an important part of fiscal policy. When the government increases the tax rate the money supply decreases. As a result, price of goods and services decreases.

According to the data published by Statista Research Department, “They project roughly a 2.25% annual rise in the general level of prices until 2026“.

To conclude with the blog, some amount of inflation is good for the economy. But when the rate is higher than 6% it can cause price rise in the economy that will affect the economy. Various controlling mechanisms has been initiated to control the price rise which has also been discussed earlier. You can take our Inflation Assignment Help to solve your assignments.
We hope you have liked our blog.