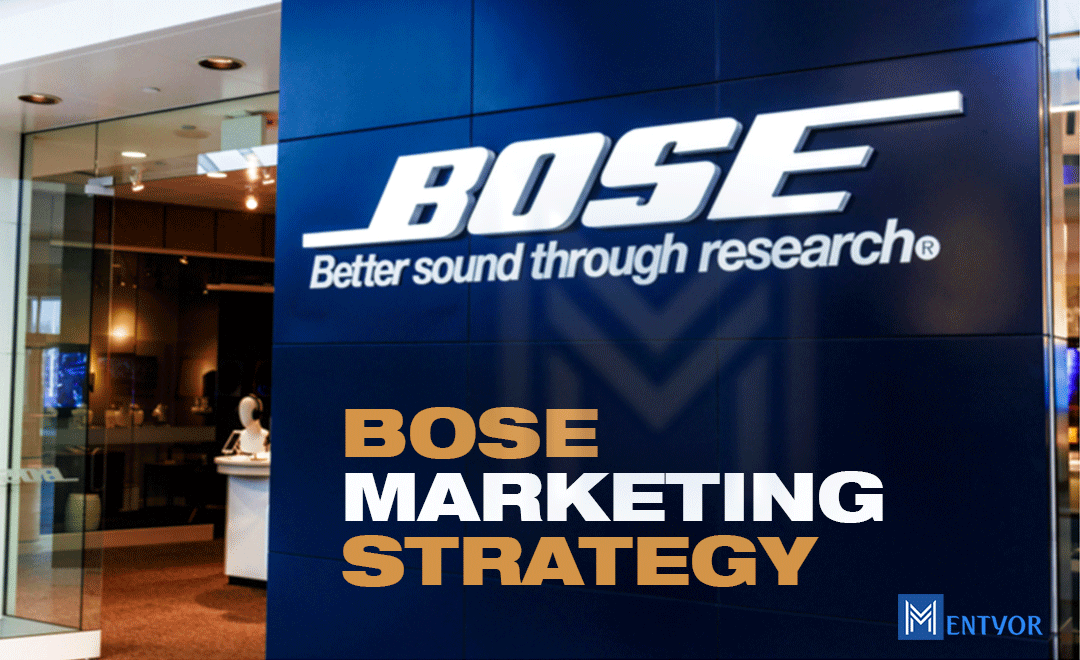 1964, a year when transformations took place in almost all corners of the world. political, economic, and social events dominated the globe. This was the time when many new countries were adopting new technologies and implementing the necessary reforms. Amidst this time of change, Bose Corporation through the Bose marketing strategy emerged as a pioneer in automotive technology established in Massachusetts by Amar Bose. Here we discuss the Bose marketing strategy along with the Bose SWOT analysis and Bose PESTLE analysis.

The company did not receive immediate success in its initial years. Therefore, the company struggled with the sales of car speakers. The journey of this company is an inspiring one. From the initial failure of selling car speakers to winning the International Telematics Award for the “Best Storage Solution for In-Car Environment”, the company has had quite a time.

What began as a mere startup with angel investors by an MIT pass out, has now become a Billion Dollar enterprise. Thus, the company Bose produces quality devices with premium facilities. Bose marketing strategy has had a huge role to play in this bewildering journey. You can read more of our blogs on Amazon Marketing Strategy, Microsoft Marketing Strategy and Apple Marketing Strategy.

The 4Ps analyzed under the Bose marketing strategy are:

The strategies employed under these categories along with creative innovations and investment ideas and the generation of a pleasant customer experience have helped the brand flourish.

Bose Corporation dominates the world market in sound system devices. It manufactures a class apart headphones as well as audio devices for cars. The company has always secured patents and established trademarks and brands. The expert team of Bose engineers is finely equipped and trained for the creation of superior and premium technology.

The products from Bose are presented in a way that appeals to the users. Therefore, Bose marketing strategy lists the product features and allows the customer to compare and select the most premium product.

The creation of patents and novice devices the customers associate Bose with supreme quality and comfort. This legacy is used as a key marketing strategy at the time of product placement.

Creating exceptionally useful and luxurious audio devices requires a lot of investment in terms of research and development. The company is product-centric and its primary aim is to develop such products that make customers develop a greater amount of affinity each time.

Bose speakers are sold at an average price of $120. Bose marketing strategy keeps the product price closer to that of its competitors such as JBL and SONY. The prices do not fall after some time, they rather remain constant.

Bose establishes itself as a high-end and luxurious brand with a fixed price range. This reinforces its status and credibility in the eyes of the consumer. Buying a Bose audio device thus becomes a goal for the customer which places the brand on a much-deserved pedestal.

The company has its roots in the USA. overtime, its expertise in the technical area and amount of money invested in conducting research, allowed it to acquire a global presence. The products of Bose Corporation are available almost all around the world.

The products are available at Bose Stores, Bose Factory outlet, Bose Airport stores, and other personal outlets of the company. Despite this huge circle of distribution, the Bose products are also available at other electronic stores and shops which sell audio devices of all the companies.

All the stores showcase different types of products. Though the stores consist of all the audio products by Bose. However, at the Bose Stores, the primary attention will be given to all the devices and creative innovations and not only on headsets. Thus, each store has its specifications in showcasing a particular device according to the customer’s requirements.

The Bose stores also provide a very customer-friendly and tech-friendly vibe to all those who enter the stores. They manage to sell an experience rather than merely selling a device.

For any brand to sustain itself in this increasingly digital and social scenario, it has to thrive on advertisements. Advertisements have surpassed their traditional motive of merely informing. Therefore, advertisements now have to be engaging and entertaining. There has to be an appeal. Bose uses emotional appeal combined with the rational appeal. Bose’s marketing strategy clarifies how audio devices make an individual’s life better.

Bose has always been a company that has spent less on advertising. It believes that the kind of customer niche that it has, does not require producing TV commercials. It rather invests a greater amount of time in research and development.

Bose has a profound digital presence, which does not require spending a high amount of its revenue on advertising. The product inventions are posted on its social media handle which boosts the ability to generate affinity and connectivity.

Bose employs Segmentation, targeting, and positioning as a Bose marketing strategy. This prioritizes the Unique Selling Proposition of the Bose Corporation. The marketers are then able to make the products of the company more appealing and attractive to the customers. Bose marketing strategy simply presents the Unique features associated with the device. For example, to sell the Bose headphones, the marketers highlight the noise cancellation feature.

The brand has a great amount of confidence in the devices that it produces and rightly so. Since the majority of the brand revenue goes into research and development, Bose corporation strives on its production caliber rather than its media image. This factor gives Bose an unprecedented sweep in the world of audio technology.

Bose SWOT analysis refers to the analyses of the Strengths, Weaknesses, Opportunities, and Threats for Bose.

Here we mention the strengths of Bose Corporation:

The speakers, headphones, Bluetooth earphones, and many other audio devices manufactured by Bose corporation are very much used. Therefore, the utility and relevance of all these devices are going to increase as time passes. The company will come up with newer and more refreshing technology as the requirement for comfort increases. This is a strength according to Bose SWOT analysis. With an increasing market demand and the brand will expand.

Bose is one of the few brands which has an established name and a rock-solid reputation when it comes to delivering a quality product. According to Bose SWOT analysis, the company’s legacy and a clean image are some of its biggest strengths. The brand holds a great reputation for manufacturing devices that are pioneers in the automotive world. The company is also known for delivering a brilliant customer experience.

Bose corporation invests the majority of its revenue into Research and development. This not only includes buying valuable resources but also hiring brilliant, qualified, and creative engineers and other employees. According to Bose SWOT analysis, the pioneering technical innovations have given Bose corporation unmatchable supremacy. According to Bose SWOT analysis, a lot of Bose devices are the “first ones” in a particular category.

Here we mention the weaknesses of Bose Corporation:

Bose devices are undoubted of the most premium quality. The devices are carefully crafted sufficing the needs of the customer. According to Bose SWOT analysis, this leads to an escalated pricing of the devices. This turns out to be a weakness for the company as it prevents it from expanding its spheres of influence on the wider masses. It restricts the company to a particular niche of customers. The ones who cannot afford the Bose devices stick to other alternatives which are becoming equally capable. Read our blog more on Bose Marketing Strategy.

Though the company was established in the year 1964, it is relatively smaller than its competitors in terms of production. According to Bose SWOT analysis, the company is known for producing quality devices this restricts the company to produce the devices at a quick pace and results in slow growth of the company.

While the company is extremely prominent in the European countries and the North American continent, where the customers are willing and able to pay high prices for the device. The market of the countries in Asia and the African continent are less accepting towards the Bose Corporation devices. The primary reason being that in the majority of Asian countries the maximum amount of population consists of the middle class, working-class people. They are generally not willing to pay such elevated prices for an audio device. Thus according to Bose SWOT analysis, this factor has again restricted the expansion of Bose Corporation.

Here we mention the opportunities for Bose Corporation:

With premium quality and high-end devices, Bose rules the audio market. The company can further increase its influence on the middle-class masses by reducing the prices. Bose provides a variety of features in its audio devices. However, not all customers want all these features. Some customers can do without the noise cancellation feature. In this way by deducting and customizing the devices, Bose can expand and reach out to the customers with a strict budget. Hence, according to Bose SWOT analysis, this will increase its reach and revenue.

Bose corporation can enter a collaboration with another company and offer its customers a wider range of options to choose from. According to Bose SWOT analysis, this will be a great opportunity for Bose to expand its influence and save some revenue at the same time.

There are other companies which produce quality products which can be used by all the masses, at an affordable price. According to Bose SWOT analysis, the competition with other Audio device producing companies can lead to a decline in Bose revenue and sales.

A RESTRICTED CONSUMER BASE

The times that we live in today, demand a more egalitarian and equitable way of conducting business. While maintaining its status as a high-end company, Bose should also decrease its prices to stay relevant in the long run. According to Bose SWOT analysis, in the face of tough competition, high prices can damage the company.

PESTLE analysis is used to determine the influence of a company on a variety of factors. Here is the Bose PESTLE Analysis:

Bose Corporation is a dominant brand in the automotive industry. despite the many threats and challenges it has managed to strive as the leading company that provides qualitative devices and experience. the Bose Marketing strategy is low key, but works well for the company. the Bose SWOT and Bose PESTLE analysis further give us an insight about the functioning of this automotive giant.